Home
/
Success
/
Business Can Be Brutal 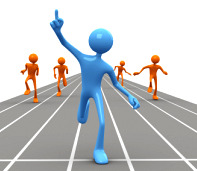 If you’re in a business where you have competitors who are continuously trying to beat you, the only way to stay afloat is to play the game correctly. In the business world, black and white isn’t always clear. It would be great if there were set rules and if you followed those rules and work hard, you would get rewarded.

The reality is quite different in many cases. The winners in business aren’t always the most honest or hard working people. Quite often, the ones who get the prize are the ones who understand how the game works and most importantly, how to win.

Succeeding in business isn’t always about who can create the best product. In fact, many of the most successful companies DON’T have the best products. Originality isn’t needed either. Facebook is just an expanded idea of Friendster for example.

In the competitive world, if you let your guard down, you will be eaten alive. You’ll have competitors who will do just about anything to bring you down if you do well enough to get onto their target list.

This isn’t to discourage you from starting a business but to have you realize that the business world isn’t for everyone. Being “nice” and “playing fair” can sometimes pay off depending on the industry but in certain industries, doing those things will get you eaten alive.

If you’re in a situation where you’re getting drowned by your competition or have been treated unfairly, it’s time to get educated. If the game rewards aggressiveness, be aggressive. If the game rewards quantity over quality, focus on quantity. That won’t work you’re saying? Look at McDonald’s (quantity) or Walmart (aggressive).

If you want to succeed in business, you need to do what it takes even if it might not be the nicest or fairest thing to do. If you don’t, you’ll see your competition do what you won’t do and pass you up.